A summary of the story thus far: David Katz was the lead singer and guitar player of the best band in the Israeli underground of the 1990’s, a trio named The Fluorescents. I think I went to all of their shows except the first one. They stopped performing in the early 2000’s. In their early days they wore suits and ties and played a dizzying mixture of punk, surf, garage and rockabilly. Over the decade of their activity their repertoire underwent an overwhelming evolution, as the exact same songs gradually shifted towards a layered and adventurous post-rock. They released one album, Exposure‍‍‍. Toward the end they added a fourth member who played guitar and saxophone. His Name is Uri Kinrot, whom you know from Boom Pam and Ouzo Bazooka. The Drummer, Ram Gabay, is still active in a variety of experimental collaborations, but his main project—which gave one, unforgettable performance (hint: Tectonics festival Tel Aviv, not the last one, the previous one)—is, according to his dictate, anonymous, and I am forbidden to say that it’s his project, which is really annoying. The Bass player, Yanay Nir, stopped making music. The last time Nir and Gabay worked together post Fluorescents was in Michal Kahan’s backup band, more than a decade ago. David Katz moved to San Francisco and for a time sang Jewish liturgical music. In the last few years he comes to Israel once a year and performs, usually by himself, in vocal improvisation. Yeah yeah, it sounds lame, and I arrive at Levontin 7 fearing that I would have to publicly admit that Mr. Katz has lost his way in the regions of “plinky plonky,” the world of experimental improvisation that is so often plagued with the lethal combination of abysmal pretentiousness, the academism of music for musicians, and a very limited desire to communicate with the outer world, even when it pays a ticket to see you.

Read it in Hebrew

David Katz, who was the lead singer and guitar player of the best band in Tel Aviv's 90's underground scene, joined forces with charismatic drummer Haggai Fershtman. The result was pure pleasure. 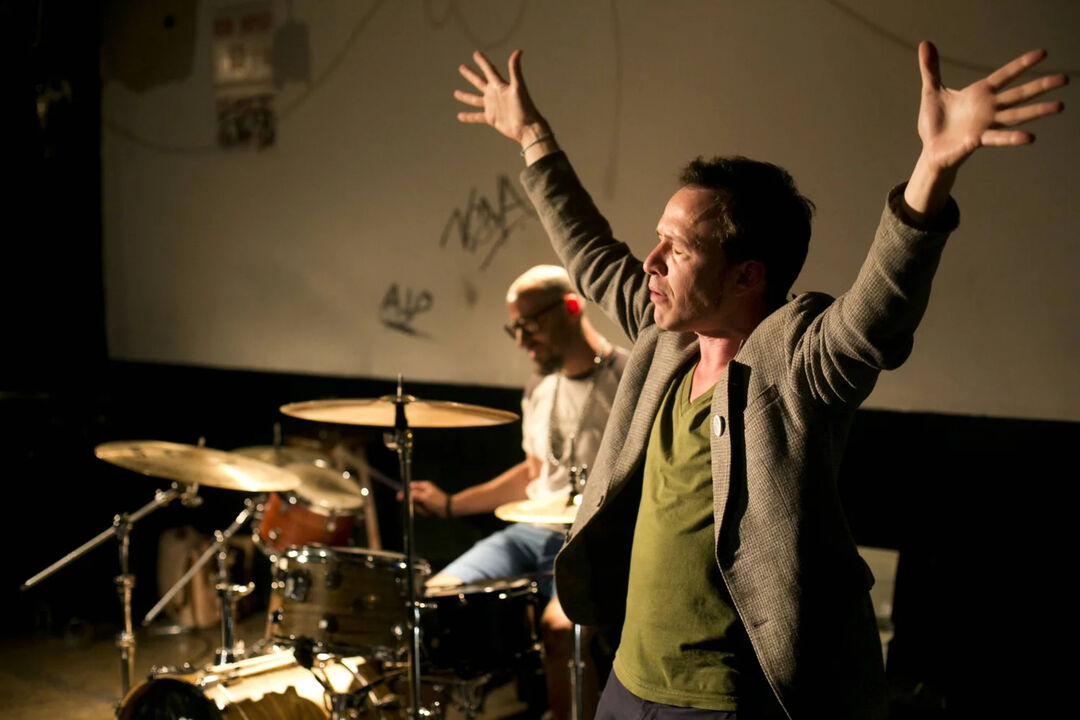 But as far as I’m concerned we’re still somewhere on the genealogical continuum that began with The Fluorescents, so I feel a commitment to appear. It is Sunday night, most of the city is curled up at home, and the basement at Levontin 7 feels almost like a family living room. The situation is the absolute opposite of Elton John at the Park Arena (which is also happening tonight). This time Katz is supported by a charismatic drummer, Haggai Fershtman, who played in a million bands from Midnight Peacocks to Monotonix, and today can be seen mostly with the Cut Out Club.

All fears of a boring show dissipate within a minute and a half. The chemistry between the compact Katz and the burly Fershtman is excellent. I mention the difference in physical dimension because that chemistry is not only musical but also very comical.  At different moments in the performance one can witness Katz chewing on a cymbal, climbing on the audience, snuggling in his mother’s lap while gurgling in gibberish, frantically rearranging the chairs we sit on in what seems like a psychotic trance, and most of the time letting out of his throat things that sound like a voodooish and enchanted speaking in tongues. Every physical encounter with Fershtman, when he gets up from his drum kit, turns into an absurd scene reminiscent of Monty Python’s Fish Slapping Dance.

The audience goes through two metamorphic stages during the performance. The first stage is a result of how naturally and easily Katz inhabits his element, which in any non-performative situation would provoke among those present a yearning for the arrival of paramedics that will take him back to the asylum. It’s clear that Katz practices whatever this thing is that he’s doing for hours and years, it’s clear that he really doesn’t care what anyone would think about him, and it’s clear that he is an uber-performer. It causes you, after five minutes, to simply forget that the situation is bizarre. Communal singing? Israeli Rock? Synchronized Swimming? David Katz running away in his socks from Haggai Fershtman who chases him crawling, with his hands inside Katz’s shoes? What’s the difference? The second stage is that everybody is holding their bellies in laughter. At an avant-garde improv show. Next year when he returns, promise me you’ll come see him. 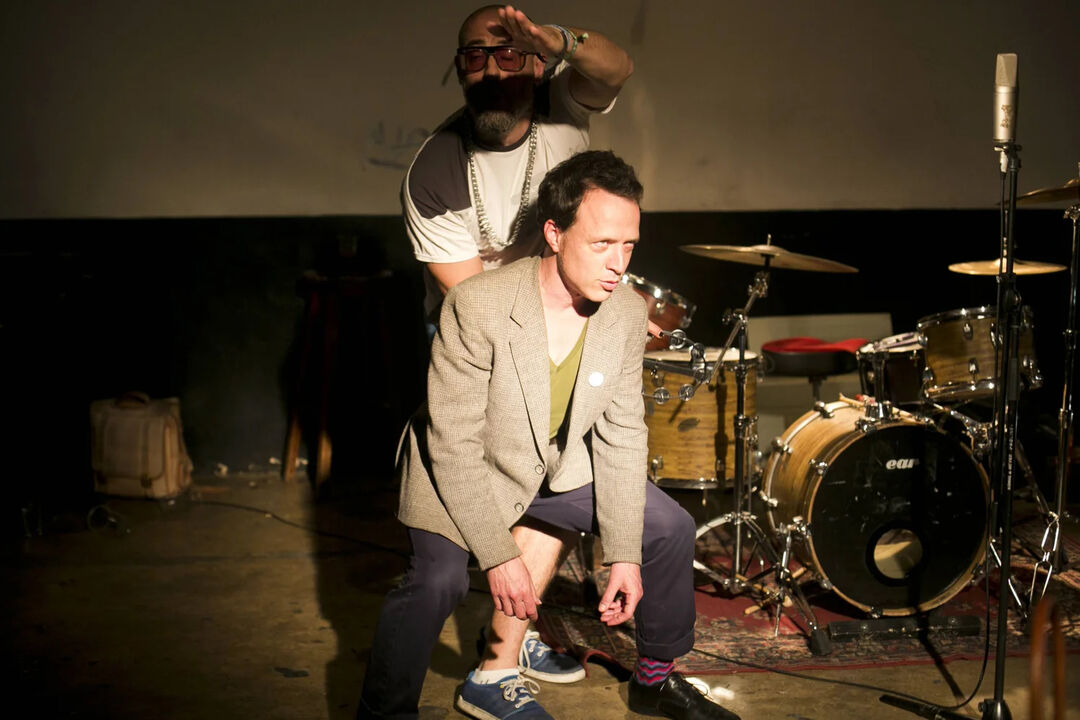